The following image is a vital update as we continue to process the ACHIRAL/death and CHIRAL/life algorithm.

Two very important updates regarding the above images of plasma discharges found all over the world recorded as petroglyphs and the recent scientific breakthrough in capturing the hologram of a photon.
Yes we have some idea of what a particle of light is now.
Its inherent architecture is being revealed … all is being revealed.
I recently found out via a Bengali associate that the following shostik is also referred to as the swastik. 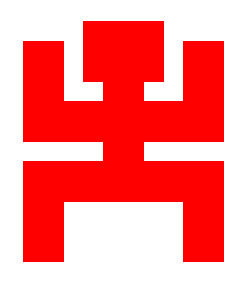 Today I noticed after I had uploaded the image on the left to my IMGUR account … that the image was number 5555!

A coincidence linked to lightning and how appropriate.
Everything is being revealed.
It is not only a ‘plasma discharge’ but also a ‘swastik’ or ‘shostik’ in Bengali.

And above the image on the right of the shostik/swastika (স্বস্তিক) is from a Bengali wedding invitation printed in 2006.

I also love the fact it has 5 lines which we might be able to match up with the 5×5 RoTaS grid.

What if the Great Pyramid the most MASSive structure at one time ever built by man is a model for the MASS-less PHOTON i.e. a particle of light?
They sure do look the same.
The Templar Cross Pattee does look identical to how a flattened Great Pyramid would appear and it also fulfills what is expected of the hologram, i.e. does it contain the information to be scaled up into 3 dimensions?

Shall we see how this most recent science news aligns itself with the idea called ‘the 3 Crosses of Christ’?

Heart of the Garden Labyrinth

Summer of 2013 lights were added to help you find your way at night … when landing.

source: The Templars and the Assassins: The Militia of Heaven

Please take note that the date of July 1309 is a perfect match for the 1379 code shared by both Freemasons and Maya!

And I could not help but notice the 37.

Crosses of the Hidden, the Crucified, and the Risen Christ

This next blog seems to have had a best before date;

I make a comment on the blog that the CROSS of the RISEN CHRIST reminded me of the Tippe Top that I speak of in that blog.
When it is clear to me now that the Tippe Top embodies all three crosses.
I became aware of this as I was building a labyrinth in my own backyard this past summer based on several archetypes that merge together so nicely.

The labyrinth I designed for my garden contains the following archetypes found within all these images:

Rosetta Fractal Mandala next to the 3 Crosses of Christ

The shape is an ‘alchemical marriage’ a ‘ceremonial labyrinth’ created by Helen Curry* and of my avatar, the THREE Crosses, along with the series of concentric rings presented below, which is based on, and created using the Greek Zodiacal Cross, and the concept of Precession of the Equinoxes.

from left to right Atlantis, Plato, and the Atlantis Cross

A model employed in the Atlantis Cross as described by Plato too.

4 AGES modEL based on Precession of the Equinoxes

The CROSS of the CRUCIFIED CHRIST or the Celtic Cross is the cross that MOST resembles the shape, form and function of the Tippe Top as it is set into motion.

But when the Tippe Top reverses itself and flips in the final stages it becomes clear that we can now associate its rotations with these three crosses.

The arrow, the celtic cross, and the reversal of fortunes implied by the swastika due to movement. Please note the numbers in the 4-Ages MOEL above that were extracted from the Greek Zodiacal Cross which apart from the handle and concentric circles, seems to be a fit for the Atlantis Cross above, both have indications for each of the 12 zodiacal signs.
This is important to note, otherwise you will never see the connections and associations.
Note the pattern I present in my 4 Ages Model.
It is consistent with the SAME astrological signs that Alice Bailey assigns her THREE CROSSES based on astrology.

Cross of the Risen Christ

TAU Cross combined with the right angle triangle
Is gravity connected to the 90 degree angLE?
Cardinal signs of the Zodiac 1, 4, 7 and 10
It is the first level or ring in the model.
The BLUE arrow rotating clockwise.

Cross of the Crucified Cross

CELTIC Cross – Fixed Signs of the Zodiac 2, 5, 8 and 11
This corresponds to the second ring or energy level, if you were applying it to electrons and the periodic table etc.
The RED arrow rotating clockwise.

Cross of the Hidden Christ

The REVERSAL or a FEEDBACK LOOP must be present in the final stage to be valid.
I have found so many belief systems that fit this 4 AGES modEL that ‘reverses’ itself in the third stage.
Similar to three wishes granted by your genii.

And remember before making that third wish, it tends to negate the first two wishes.

The above labyrinth in Ravenna contains a spiral yellow brick road made of triangles,  an obvious cross structure and due to the spiral movement we can clearly see that the underlying design is asymmetrical.

But the best part is that this labyrinth in Ravenna appears to be a match for Ulam’s spiral, Peter Plichta’s prime number cross, and the work of Anthony Morris who helps illustrate a connection between DNA and the prime number spiral.
It is clear from all three ‘maps’ that there is a distinct way in and out.

Prime Numbers plotted on a grid – the Ulam Spiral

4th century Celtic Stone has ALL 3 Crosses of Christ represented in fact.

So I ponder what the Spring Temple Buddha in China is ‘signifying’ at this stage in our ‘evolution’ where it might be true the creation has already been documented, its already been written?

And the best part is that Alice Bailey, the Greek Zodiacal Cross, Plato, and Aleister Crowley and ME all came to the same conclusions.
I clearly was lead by activating/using my intuition.
Nobody showed me anything.
Which means anybody can tap into this process of what Carl Jung called ‘individuation’.

The PoWeR of the mandala will be later explored.

My childlike ‘follow the dots’ doodling I found out later on was an intuitive match for Aleister Crowley’s interpretation of the same Greek Zodiacal cross.

So here is another link that discusses Alice Baileys book called Esoteric Astrology and the three crosses attributed to an ‘archetypal’ christ, NOT to be taken literally.

“The moon, from the angle of the esoteric knower, is simply an obstruction in space, an undesirable form which must some day disappear.”  -Alice Bailey

“I feel the same way about the pentagram.”

Pentagram of course is connected in a profound way.
Pentagram contains the golden code within its architecture.
When I think pentagram my mind defaults to the golden mean, the golden ratio, Fibonacci numbers, the golden spiral, golden rectangles or simply just phi.

Bottom line…the TRUTH is that the Pentagram is a symbol to represent nature’s spiral.
And the best part is I link all of the foregoing to phi and a simple code easily remembered by any child.

And this simple code can be found embedded in the most popular Tarot deck ‘played’ with today.
The Rider-Waite Tarot.
Designed by a Freemason and a co-founder of the Golden Dawn.

So the CODE is clear to me.
It is found on CARD X of the Tarot depicting the 4 Gospels 11825

The following patterns were found in Matthew 1:18-25 recording the birth of Christ.

The Pattern of SEVENS in Matthew 1:18-25—The History of Christ’s Birth

Found in the Coptic translation of the 5th Gospel with the missing ‘3’ restored.

Found in so many places I am beginning to compile a lengthy list of ‘coincidences’ found here:

What size and shape is the labyrinth?

Much has been written about the exact size and measurements of the Chartres labyrinth.

Hermann Kern (Kern, 1982), for example, stated categorically that the labyrinth is elliptical rather than circular, 12.60 x 12.30 metres (41 feet 4 inches by 40 feet 4 inches). He based his statement on comments from Maurice Guinguand, who had presumably taken his measurements from the often-published overhead photograph that appears in many books. However, this photograph, taken through a small hole in the ceiling of the nave, where the vaulting ribs intersect, is not directly above the centre, but offset toward the entrance of the labyrinth. As a consequence, it will always appear slightly elliptical in any of these apparently ‘overhead’ photographs.

The exact size of the labyrinth has been the subject of some disagreement. W.H. Matthews said about 40 feet, Nigel Pennick and Lauren Artress say approximately 42 feet and Emanuel Wallet gives 13 metres, nearer 43 feet.

… but it is difficult to see that the original architects would have created this slight obliquity of ⅝ inch (1.6 cm) on purpose.

It would seem more likely to be the result of 800 years of gradual compression of the floor from the weight of the aisle pillars that line the nave, either side of the labyrinth, causing the individual interlocking stones that form the pavement to creep slightly inwards across the width of the labyrinth.

I am not sure I agree with what I have highlighted in italics.
The asymmetry I feel was part of the design from the very beginning of the design process.

These three symbols are fine representatives of MOTION, SPACE, and TIME.

and SPACE (cross @ rest) and TIME

Below we have an image of the 3 Crosses of Christ placed next to plasma physics ~ via the work of Anthony Peratt and Dave Talbot.

What do the 3 Crosses of Christ look like when stacked on top of each other?

I see a match made in heaven!

Clearly it does not matter how you want to express it, The Temple IN Man, The Temple OF Man, or perhaps as we continue inward on our journeys it becomes clear and we realize The Temple IS Man.