Non-invasive method being used today to penetrate the secrets of the Great Pyramid are muon scans.

I must say as Photon Knights Templar we do like what is being found.
The following two images are in support of an idea or theory proposed years ago.
i.e. what if the MASSive Great Pyramid is a model for the MASS-less photon?

Think of it … one model or idea that can scaled from the microcosm to the macrocosm.
One idea worth further investigation. 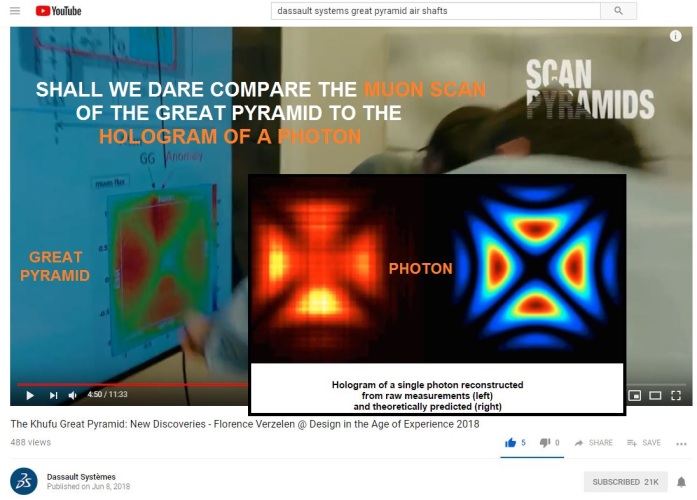 However the following video seems to negate many of the findings.
All of them?

The relation of Man, the microcosm, with the Universe, the macrocosm, c1617

The spheres of the Sun, Moon and planets and the hierarchy of angels and archangels, lead to the trinity of God represented by the triangle at the top.
In the centre are the spheres of the four elements earth, water, air and fire marked with the four temperaments.

And whoever built the pyramids used RATIOS…I suspect.
The current height of the Great Pyramid is approximately 137 meters in the north-east corner according to trail blazing architect Jean-Pierre Houdin.
The original height was approximately 146.5 meters.

We can arrive at approximations using ratios based on two numbers which always sum to ‘64‘.
64 are the number of DNA codons that all life on earth defaults to.

the ratios based on those numbers are

Did the builders use RATIOS because there is good REASON behind it…?

The above numbers if you correlate them to the Great Pyramid suggests a story.

The ratio 38:28 corresponds to the original finished height of the Great Pyramid of 146.5 meters

The ratio 37:27 suggests where we are today 137 is the inverse of alpha the fine structure constant 1/137
The ratio 36:26 is associated with the number 128 which has been associated with an older universe, an older larger alpha of 1/128 (see below)

So it appears I may have stumbled onto a simple and elegant pattern linking an oscillating ‘alpha’ to the height of the Great Pyramid.
I must conclude that in the vicinity of 128-129 meters, approximately 9 meters below the current summit of 137 meters is a treasure yet to be found.

“We have no right to assume that any physical laws exist, or if they have existed up to now, that they will continue to exist in a similar manner in the future.”
– Max Planck
The Universe in the Light of Modern Physics (1931)

The reason I needed Max to walk the Planck and take the plunge into a new frontier is because it appears that the speed of light, and along with it, the fine structure constant are both in jeopardy of no longer being ‘constants’.

It is the “coupling constant” or measure of the strength of the electromagnetic force that governs how electrically charged elementary particles (e.g., electron, muon) and light (photons) interact.

At shorter distances corresponding to higher energy processes or probes (large momentum transfers), the screen is partially penetrated and the strength of the electromagnetic interaction increases since the effective charge increases.

depends upon the energy at which it is measured, increasing with increasing energy, and is considered an effective or running coupling constant. Indeed, due to e+e- and other vacuum polarization processes, at an energy corresponding to the mass of the W boson (approximately 81 GeV, equivalent to a distance of approximately 2 x 10-18 m),

Thus the famous number 1/137 is not unique or especially fundamental.
http://physics.nist.gov/cuu/Constants/alpha.html

Speed of light may have changed over time
http://users.beotel.net/~gmarjanovic/alfa.html

The number is 137…not 42
http://www.quadibloc.com/science/phyint.htm

And then I found this post I had written:

That was then, this is now.

We have since acquired a simple SUN/MOON ratio that can be applied to the CUBE of 64 based on 4^3 which happens to match up nicely with the number of codons of our DNA, that forms the basis for all life on earth.

It all sounds like a blueprint, or a grail tale worth preserving and placing into a chest or an ark, and calling it the holy of holies batman. DNA knowledge and wisdom regarding the preservation of life on earth would/should be a big deal.

And the association to the 64 Hexagrams that comprise the 5000 year old I Ching is not a coincidence, as others have noted too.

Those 64 codons form the codes which comprise our DNA, which is the common denominator of ALL life on earth, presenting itself as a candidate worthy of ‘grail’ status.

Then Frank C. Higgins reminded me that long ago the ancients had assigned the number 36 to the SUN and 28 to the MOON.

So I did the obvious. I took the SUN/MOON as a ratio. And the results were stunning to say the least.
Could it be this simple?

Hahaha
Recall that Ha/tha (as in Hatha yoga) means Sun/Moon.

Which brings us back to the beginning of this blogpost and the number 1.258
One of the numerical clues that I am following as I time travel, remembering what I already seem to know?

My former firefighter badge was #1258

So it appears the SUN/MOON ratio is directly connected to the maintenance of our DNA
a.k.a. known as the Holy Grail
the Ark of the Convenant
and the buried treasure

Famous early x-ray image of DNA a.k.a. PHOTO 51 taken by Rosalind Franklin
Her role in the discovery of the double helix:

…are DEM BONES a reference to DNA?

i.e. what all SAGES see is that the X marking the treasure is the same perspective as looking down/from above the double helix.

And curiously what does the inverse, i.e. Moon/Sun ratio or 28/36 yield?

Which brings us back to the IDEA of the CUBE and how many firefighters died on 911.
The number is 343.

We have no right to assume that any physical laws exist, or if they have existed up to now, that they will continue to exist in a similar manner in the future.

One form of the star is found in quilting designs. Using four colors, there are a total of 128 diamond shapes in the pattern, 16 in each section. The quilting design is called, The Lone Star, The Texas Star, or The Bethlehem Star.

Joe E. Mason may have been onto something about the numbers 1152.

East meets West and the meeting point is ‘alpha’ (fine structure constant) herein we have evidence of a language that the universe utilizes to ‘replicate’ itself.
How does the universe get information from the ‘source’ to the outer reaches of both outer space and inner space?

Alpha (1/137) vs. Alphabets
Anything man can do the universe has already accomplished on some level and it was probably better designed too.

The Spring Temple Buddha is a statue depicting Vairocana Buddha located in the Zhaocun township of Lushan County, Henan, China, built in 2002. It is located within the Fodushan Scenic Area, close to National Freeway no. 311. At 128 m (420 ft), which includes a 20 m (66 ft) lotus throne, it is the tallest statue in the world.

Please note the height of the Buddha is 128 meters including a 66 ft. lotus throne.

Please note the height of the Great Pyramid is 137 meters high and it overlooks 66 1/3 ft. sphinx, in contrast to the Spring Temple Buddha that sits on a 66 ft. lotus.

Current height of the Great Pyramid is 137 meters but the original height is estimated to  have been about 146.5 meters, which brings us to the next ratio based on 38:26.

It all suggests to me that the original pyramid capstone would have been about .5 meter in height and it also suggests that we could expect to find something in the Great Pyramid at a height of about 128-129 meters, i.e. based on the S/M (sun/moon) ratio of 36/28.